Pardon my French, but what the frack is in the Empower Kool-Aid stand? It must be might powerful to get 40,000 plus members to pay for a free service, based on the premise of viral traffic on a service that is blocked by Google and Facebook. This might be the first time these two companies have ever agreed on the same thing.

Normally I try not to completely slam a company. Every business, including mine has their flaws. However, I find something particularly distasteful about Empower Network’s you have to join us approach to marketing. Using insulting language like calling people “wussies”(check out step 2 of their marketing) and false personas to get people to join their ventures is just not right.

The same site search on Google came up with only 4.49 million results. This means that the only way to get exposure for your Empower Network is to create a second blog not on Empower Network. Hm! Viral marketing at it’s greatest. 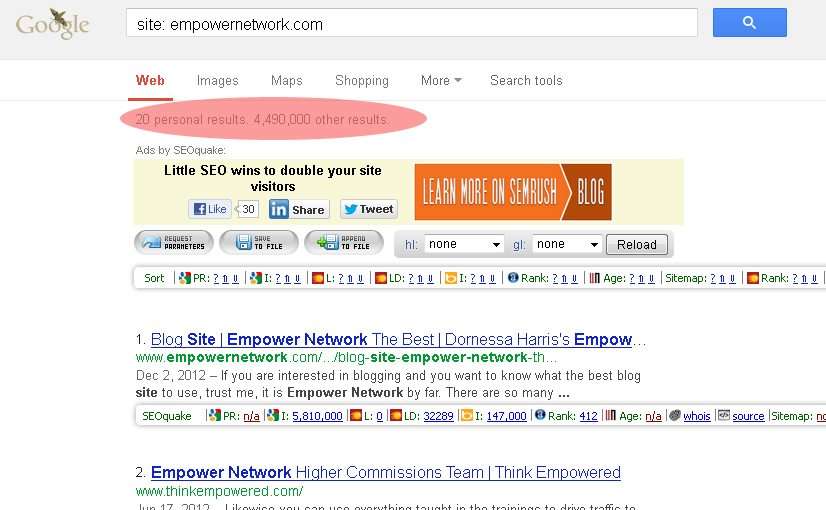 However, as they say in sales, and there’s more…

Now, complete disclosure here. I am not an Empower Network member, nor have I ever been one. However, from every source I found online the basic membership runs $25 for their WordPress MU site and basic optin form.  Additionally, as an affiliate, I have never paid to promote someone else’s products. Take that back. I did join Amway, I mean Quixtar, I mean Amway for a month, and had a stint with MarketAmerica. However, as an internet marketer I do not pay to promote someone else’s products.

If I am going to spend my time promoting your site, you should have the decency to appreciate that, not charge me for the time and effort I put into helping your business grow.

Additionally, refunds are harder to get than admissions of guilt from banks after 2008.  According to the Better Business Bureau, Empower Network is not a member, and has a C- rating.  While this is not shocking for an MLM company, the really disturbing part is how many people had issues with refunds after being over-promised and under-delivered with the service from Empower Network.

I guess that is my main beef with the company. They charge up to $1600 in trainings for common sense marketing tactics that do not work with their own site.  They talk about blogging content, but no one accepts their content. They discuss optin forms, but most new internet marketers will struggle to build their list with no traffic.

Finally, my biggest challenge is how you can spend $25 a month on a service that provides sub-par value at a higher price. Instead, buy a $7 domain on NameCheap. Then get hosting for $36 per year (note: yes this is self-promotion. deal with it. That is all). If you need help doing the WordPress Install I do this for clients.  Aweber(affiliate and user) is $19 per month.  I have used these two tools for the four years. Best investments I ever made in social media.

Just to do the math here:

So, for a grand savings of $29 per year you can get a far superior site and email marketing service. The broadcast and follow up system on Aweber alone more than pays for these services every year. In fact, In December I sent out a two series email marketing broadcast that alone made a bit under $500.

Why is this important? Well, it goes to the heart of Empower Network makes you drink the Kool-Aid. By calling you names and employing NLP tactics they convince you to buy into their program. Buy in for $25 per month, and end up spending $1600 on training or their grand package of $3400 for the Costa Rica training. By the way, the training is in Costa Rica, because the company is actually located in Costa Rica. They have a US mailing address, but most of their team lives in Costa Rica.

This is probably one of the reasons why the US FTC has left them alone. The servers are not in the US.  Out of their jurisdiction in Costa Rica.  It is also one of the biggest reasons why they are allowed to promote a pyramid scheme online. Oh, one reason why they have their own credit card processing is because some credit cards do not allow Empower Network purchases.

Now, for those of you wondering, yes these are my opinions. I have done my best to base them on fact, supported by evidence. If I am wrong, please let me know. I enjoy the debates, the endless discussion over a group is really meant to benefit the members or their “Jim Jones” leaders.

Thought I would add some thoughts by David Risley on Empower Network to conclude the discussion.