So, how will this be useful and beneficial to your business. Well first of all, this will provide a secondary measure to analyze traffic from one of the largest social networks on the planet. Secondary, because Google Analytics is a much more comprehensive system than Twitter web analytics. Google measures pretty much everything for a blog from search to social to time on site to bounce rate to a whole lot more that we do not need to discuss right now. 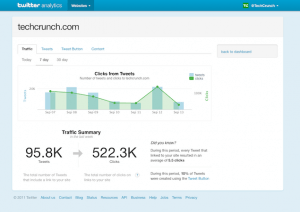 The one advantage this will have for Twitter users is that some clicks are not measured from Twitter on Google Analytics. For example, if you use Twitter and direct people to your fan page you are never sure exactly how many people actually check out your page. Yes, you might get 10 new fans, but is that out of 100 views? Also, what if you are directing people to affiliate links. Would it be nice to know how many affiliate links actually start with Twitter.

Another thing that Twitter Web Analytics does is measure how effective your Tweet button is. You know the button that I really encourage everyone to click just once to test out at the top of this article next to the Facebook share button, which if you mouse accidentally clicked it would be OK as well. That is the button that will be measured for effectiveness.  Essentially helping you understand the role social media plays on your websites and blogs.

Finally, now you can know which tweets actually work. That is the point of tracking your clicks? To know what works better than the rest. Maybe your tweet with just the link brought 3 clicks, but maybe the one with the catchy title brought 35 clicks. Also, maybe it was so catchy that it was retweeted by the right people and brought in 350 clicks.  Hm! Maybe there is a way to collaborate with those people, and then you are off another business adventure.

Whatever the case, this is a nice addition to Twitter. Twitter Web Analytics answer that age old question what are we doing right and wrong.