Recently someone had mentioned that I had been listed as one of the top Chicago bloggers by the Chicago Sun Times or Tribune last year. A fact that completely eluded me. I still have not been able to find the article about me, but it gave me the idea that a top 10 Chicago bloggers list would be a great idea to discuss here today.

How do you get in the top 10? Well, I am glad you asked. Here are the guidelines that I used to figure out who would be a great fit for the list. A bit lengthy: Absolutely! Very helpful: You better believe it.

First, you need to have a blog that has been around for at least a year. Any shorter and it could just be a fluke. (#10 GridChicago is about 9 months and I let it slide)

Second, your Alexa ranking should be around 100K or lower. Let’s be honest, Alexa is not 100% correct in their judgment and if there were outside signals like comments and social interaction I ignored this rule. However, a blog with no interaction and bad Alexa ranking generally indicate to me that a blog does not get a lot of traffic.

Third, you need to have 4 blog posts in the last 30 days. If you can not blog at least once a week, then it is not enough to be considered here.

Fourth, I do not want this to be a list of radio, news, and TV stations. Therefore, any traditional broadcasting outlet is not considered here. While some of the outlets have great blogs (ChicagoNow for example), the challenge is how much of their blog posts are from them and how many are duplicates of other stories told on their other outlets. Plus, they are not always true blue bloggers.

Fifth, I did my best to make sure that the blog or blogger had a strong foundation in Chicago. There were some blogs that had offices in Chicago, but were mainly headquartered and run in NYC or Boston. On the other hand, blogs like the Chicagoist (#2) is based out of New York, but has a strong foundation here in the city.

Sixth, do people actually interact on the site. A blog is about creating a community. Does the blog have comments or significant social traction? If not, why? If yes, how much? Is one comment every three posts enough? Probably not, but 5-6 comments per blog are a start.

Seventh, make it easy for people to share and comment. If you have to register you do not understand the concept of blogging and engaging a community. There were a lot of great blogs that I discounted, because of this reason. I can not stand when the Wall Street Journal or the New York Times does it. What makes it alright for community blogs to do the same.

Eighth, you do not have to live in Chicago proper, just in the Chicagoland area. That means that Aurora works, but Dekalb does not. I am sure some city dwellers will argue the distinction, but the list is finished so HA! 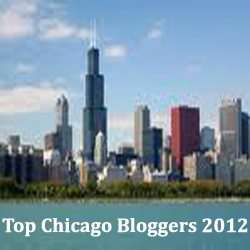 There were a few that seemed like they could be on this list in the near future, but for right now are not ready. (eg. YoChicago.com & ProgressIllinois.com)

1. Signals Versus Noise-Great blog that discusses business, web strategy, and culture. It pretty much was a checklist of all the items that I mentioned above and the reason why this blog is being listed first in the rankings.

2. Chicagoist– While I wanted most of the blogs to be Chicago only, I accepted this one, because it actually has a large Chicago focus. A number of other blogs with multi-city reaches sort of faded on Chicago or another city as you read on. This blog has enough Chicago information to be informative.

3. Gapers Block – I was initially going to pass on this blog. That was until I saw it pop up on every list I found while researching this list.  The information here is solid and the site just feels Chicagoan. I especially liked how they are documenting demolished buildings with Google maps on the bottom right corner of the blog. Finally, who else names a blog after a traffic bottleneck? Pure Awesomeness!

5. Carol Roth I have been reading Carol Roth’s blog for the past few months now, and it is just great. Imagine my surprise when I started researching this post and found out she lives in Chicago. Even cooler! Her insights into business are just fantastic as she discusses topics that would never have even occurred to me to write about.

6. The Expired Meter – How can you expect me to not include a blog devoted to traffic in the city of Chicago? If we could take down ever single red light camera in the city, I would be a lot happier. Apparently, I am not alone. P.S. Please make sure to tell your state reps to say “no” to the new speed cameras they are looking to put around town. Big Brother just got a little worse.

8. View From The Bleachers-A list of Chicago blogs without nary a blog talking about the Cubbies. I think not! Oh no you do not!

9. Uptown Update– There were about a dozen neighborhood blogs that I could choose from, but the Uptown Update seemed to be the best of the bunch. One of the articles immediately drew me in, and it is right in the middle of Vietnamese town where there is a small bakery called Chiu Quon Bakery that has the best the bean, steamed, sweet, meat filled buns in all of Chicago. My wife and I will go 30 minutes out of our way just to get those buns. Then go to a bank to get cash to buy them.  How can I not include the Uptown Update?

10. Grid Chicago- This blog is completely focused on sustainable traffic in the Chicagoland area. While the blog is the only site here with less than 1 year of writing, it certainly has captured the attention of a wide number of Chicagoans as they were listed on site after site in my research along with being listed by Gapers Block as well. I felt this is a growing blog that is definitely gaining some traction.

Please let us know if there was someone we missed, so we can add them for future editions of this list. Just make sure that they fulfill the requirements above. I hope you enjoyed this look into the Top 10 Chicago Bloggers 2012.