The Interesting Discoveries Of The Chicago Loop

I was speaking last night at the Mid-America club in the Chicago loop. The speech went well, plus it is always cool being on the 80th floor of the Aon building overlooking Navy Pier. Along with what feels like being a stones throw away from the Hancock building. I took the train downtown as I usually do, because I have no desire to deal with the traffic and the hubbub! Instead I catch a nap on the train and all is well.  I am sure you are saying this is a good and dandy, but what the heck is your point Andy.  Something caught my eye when I was on the train platform going home.

It was a plain billboard compared to the rest of the billboards, but it just had that what the heck is that doing in between an ad for the new TV series “Revenge” and also the new Volkswagen car?

So, being me I took a picture (see below) and then checked out the website to find out about this curious poster in the middle of the Chicago loop. 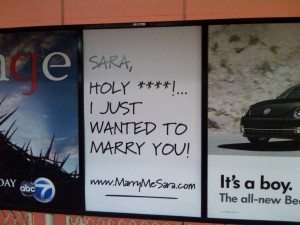 When I went to the website http://marrymesara.com I found an extremely interesting video that made me laugh to say the least.  You have to watch it for yourself. I do not want to ruin the surprise. Then I did what the creators of the video James and Sons wanted you to do with this video. I looked around.

For disclousure purposes, I want you to know that I have no association with the company behind the campaign James and Sons. I will be emailing them this post after it is up, so they know about it, but that is it.

What I thought was remarkable about this was how a simple poster stood out among other much more colorful and visually appealing billboards. Plus, when you see in writing, “Holy ****! I just wanted to marry you!” You do a bit of a double take.

The other thing is that this is great marketing, because I did not find this on the brown line stop off Kedzie where I live. Not to say that is a bad place, but just not as relevant to blue collar families and hipsters who would more than likely ignore the ad. Instead, I found this on the Randolph/Wabash stop which is in the heart of the Chicago loop. For those not familiar with Chicago, the Chicago loop is the fabled downtown area where tourists come to see Millenium Park, Hancock Observatory, Navy Pier, Sears Tower Observatory, The Art Museum, and more.

Additionally, it is the business heart of the city, where you have large multinational corporation headquarters or regional headquarters just minutes away. In those buildings there are tens of thousands of twenty and thirtysomething males and females walking by that poster everyday. People who are in the process of dating, engaging, and marrying their sweethearts.

In essence this is a prime target area, and a great example of marketing strategy at work. James and Sons combined the best of online video and offline marketing. Plus, from what I could tell in my research they also revamped a campaign that looked moderately successful a few years ago, but would fit well in today’s market.

Spend a few minutes watching the video on their site and let me know your thoughts on this marketing campaign. I like the simplicity of it, but want to hear your opinion of whether this was a great campaign? How would you tweak it? What would you do to integrate the offline and online more effectively? For me, I am just that much more interested to see what I find next time I visit the Chicago loop.