A storm is brewing in some political circles over the Gary Johnson Debate. Gary Johnson is the Libertarian presidential candidate, who is in third place behind Barack Obama and Mitt Romney for president. Some of you may now be asking the obvious question, why have I not heard of him before? That is the topic of today’s post, and the reason behind the “Gary Johnson debate.” This post is a request to the Commission of Presidential Debates, and more importantly to the American people, to let Gary Johnson enter the debate on October 2nd of this year.

Right now, Gary Johnson has 3% of the electorate supporting his run for president. This is according to the CNN/ORT poll (download link) run earlier this month.   However, in states where he is well-known, like New Mexico where he was a two term governor, have him polling closer to 13%. Not enough to win, but definitely enough to ask who is this guy.

This begs the question: why do so few voters know about him? The discrepancy lies in how our political system treats third party candidates. While most voters grumble about the lack of choices behind door A and B (Obama and Romney), the media has largely avoided the discussion on third party candidates like Gary Johnson and Green party candidate Jill Stein.

Before we get further, a quick disclosure: I am not 100% sure, but I will probably be voting for Johnson in November for reasons you will see below. This article has not been influenced or encouraged by the Johnson ticket or the Libertarian party, nor do they hold my views. These are my views; deal with them.

I have remained quiet on this subject for too long as the government continues to destroy personal and small business owner rights in this country through Cold War tactics from irresponsible leadership bent on hurling our country into an economic abyss that goes to the heart of this great country’s ability to survive.

As Edmund Burke stated, “All that’s necessary for the forces of evil to win in the world is for enough good men to do nothing.” Consider this post my attempt to stand up for the values we hold so strongly. Figuratively of course, because writing is easier to do sitting down.

So let us discuss the Gary Johnson debate in more depth. What is it? And why should Americans be aware of this issue.

First, on October 2nd, the Commission on Presidential Debates is hosting the first presidential debate.  Right now, only Obama and Romney are scheduled to debate. I believe this is short-sighted.

Second, These debates have won (and lost) presidencies in the past. John F. Kennedy’s smooth appearance against Richard Nixon is still considered one of the defining moments in American history, and the turning point in his election. Furthermore, Dan Quayle is still “No Jack Kennedy.” A line that would forever designate Quayle to a vice-president hack. While these debates do not decide the outcome of the election, they have a tremendous impact upon registered voters decisions. 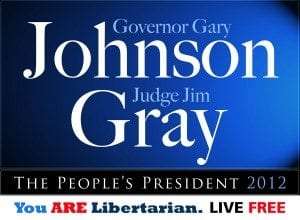 Why Should We Allow The Gary Johnson Debate?

Here is why I believe we need to include Gary Johnson in the debate. They are not meant as a means to get him elected. Instead, this is to allow the chance to present his views.

My challenge is with the third requirement. For those who are not able to even get enough signatures to join the campaign in enough states to win the electoral college you have no business in the debates. Those candidates who can garner enough signatures to qualify for 270 electoral votes should be included. While I understand that you should not let every Tom, Dick, and Harry run for office, when you have as much support as Gary does let him voice his opinion.

Most people who run for president never get more than a handful of votes. However, to simply get 3% of of 200 Million voters says that 6 million people have enough trust in a candidate to hand over the country to him. That is a statistically significant part of the part of the country being ignored.

Second, our country needs help! Having an A/B true/false answer to our country’s challenges is not enough to solve the challenges this nation faces.

According to the Congressional Budget Office the United States debt to Gross Domestic Product is around 70%. In other words, the amount of debt this country has is equivalent to 70% of the income the entire country earn every year. On an annual basis this country pays $450 billion dollars in interest payments.

Let’s take another perspective. To get a home loan from a Fannie Mae lender your debt to income needs to be 36% for all monthly debt payments.  In the US the total debt owed to debtors stands at $11 trillion and GDP is $15 trillion in 2013 according to the White House’s Office of Management and Budget. Theoretically, if the US government could not even qualify for a $300,000 home loan from Fannie Mae, how can it run our country?

I want to hear Gary Johnson speak, because he has a plan to balance the budget in 2013. If for nothing else, I want to hear how his plan holds up against his opponents.

Third, we need new ideas.  Over the past few years our freedoms have disappeared under a litany of actions from the Patriot Act, unlawful Guantanimo bay detentions, and other  gross violations of Americans rights, we are at a turning point in the freedom of this nation.

Take the United States prison population. According to the US Department of Justice’s Bureau of Justice Statistics there were over 7.1 million prisoners in the adult corrective system as of 2010. The number was down from the high in 2006, but every 1 in 48 adults now is in the prison system.

The same study shows that 52% of all prisoners are there from drug related cases, 11.5% are immigration offenders, and 8% are public order crimes. Combined we see that 71.5% of all violators are there because of victimless crimes.

My concern is that this country has turned a blind eye to gross violations of the Fourth Amendment to the constitution. One of the reasons I like Gary Johnson is he knows the drug war failed. The war failed on a massive scale. A new solution is needed that does not imprison so many and take away their lives.

Should We Let The Gary Johnson Debate Continue?

The final thoughts on this are yours? As a people we decide our leaders. 20 years before the French Revolution and 150 years before most countries began to contemplate democracy our founding fathers believed that when you find responsible leaders to guide this nation they will have the support of our country. All I am asking today is to determine whether the Libertarian party deserves a spot at the table, so we can keep the “Gary Johnson debate” alive.