Steve Jobs: A Life And Now A Legend

If you have not already heard, which means you have been in a media blackout for the last 14 hours, Steve Jobs has passed away. I wanted to just give a short testimonial to someone who makes blogging possible, if not our entire technological world. 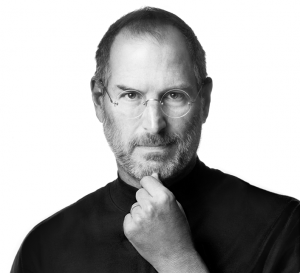 Apple's Photo On Their Homepage

The reality is that he was the person who took the idea of a bulky computer that sat in dank education and government buildings and transformed it first into the desktop pc.  Along with Steve Wozniak and a cadre of supporters and programmers they would take the computer from the estimated 5 computers Thomas J Watson, former IBM CEO, once said the world needed to almost 5 in every home.

After being ousted from Apple he then went on to found NeXt Computers (later acquired by Apple when they brought Jobs back) and Pixar.

He was the financing behind the some of the greatest changes in movie animation in recent memory. The resulting first movie, Toy Story, is now a classic animation story that has changed how animated movies work.

If that were not enough he then went on to create iTunes and that thing that fits all of your songs in your pocket, the iPod. Before him digital music was illegal. I remember in college friends would talk about how many songs they downloaded from Napster and howling over the site being shut down by the government. People thought commercial music was dying until Steve Jobs pieced it back together.

That is really a summation of his life. He pieced together the amazing things that were around us and made it better. A world where we can have a computer in our room, while watching an animated character named “Andy” (not me), as we open up our iPod to play some songs in the background.

Maybe I can ask my wife to take some pictures for this blog with her iPhone. Another day!

My final thoughts have less to do, however, with the technological vision he had and more to do with the entrepreneur we all want to be. Steve Jobs epitomizes how we all want to be as entrepreneurs. He had a vision which no one could sway him from, and the ability to carry out that vision.