Why do I need social networking for my business? This is a question I receive all too often. Therefore, for every person who says that you should not focus on it for bringing in business you need to read this information. The social networking statistics below are for every business person from the restaurant owner to the salesperson to the internet marketer.

Social Networking Statistics You Can Use

Internet Usage Statistics Around The World:

According to Internet World Stats there are just shy of 2 Billion people on the web.

Berkely college states there are 6.85 Billion people around the world today.

This means as shown in the pie chart below that 28% of the world uses the internet. 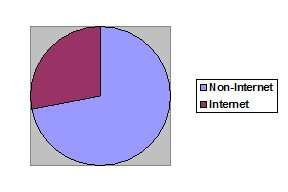 Percentage Of Internet Users Around The World

Here are the usage numbers for each network and also at the end a combination of the power of social networking around the world.

Facebook is the big kahuna of social networking with 500 million-plus people in the network with approximately 150 million people living in the United States according to their site. That means out of the 300 million people in the United States today a little less than half of them are on Facebook. I might as well stop here for those who do not believe that social networking can have no value for your business.

Twitter while not as large as Facebook is growing at a rapid clip. In April during their Chirp convention for developers, they stated they had 105 million followers. Now according to the blog post, by soon to by departing CEO Evan Williams, they have 165 million users.

Myspace used to be the dominant force in social networking. Now it has been reduced to an entertainment social networking site. It is still not a site to ignore, because their user base is still a gigantic 160 million members, but the numbers are not as impressive when compared against the growth that is happening at sites, such as Facebook and Twitter. Still do not discount them for certain niches.

LinkedIn is the professional’s social network. The site looks like you are not allowed in if you are eight. Still the success of this network is due to the large participation from an older, more professional audience looking to take a dip in the social networking pool. Also with over 80 million users and half of them in the United States this is a site that you want to keep tabs on for the future.

In the list above we only graphed out the four largest social networking sites (excluding Youtube) in the world. Even still there are a combined 900 million user accounts on all of these networks. That is roughly half of the world’s internet population and also the number of accounts is almost more than three times the size of the population of the United States. If you need more proof that social networking can help your business, then think about this for a second. I did not even include Youtube, Yelp, Amazon, eBay, Yahoo Groups, and other social networking sites with millions of additional users.

The world has changed and for a business to ignore these changes it will do so at its own detriment. In the meantime, I have stated my case. Take a look at the social networking statistics here and let me know your thoughts.