The time of year has come for me to present the social networking statistics 2013. My third annual attempt to look sophisticated and erudite as I discuss the state of social networking through numbers. Since I now have two years of previous statistics to compare to, this year we can provide more in-depth comparisons to previous years.

For those who want to see the development of these social networking statistics over time please feel free to check out:

Now that we have a framework, let’s begin.

To understand the impact of social networking, we first have to know what the base internet usage is around the world. This will give us an understanding of how many people use social networking regularly. According to Internet World Stats the world now has 2.267 Billion people using the web.  Internet user-ship has grown on average about 150 million people per year over the past two years. 32% of the world’s 7 Billion people now use the internet as a means of communication. 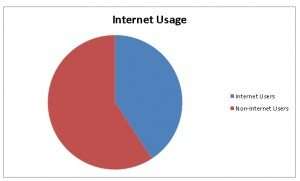 Let’s now break down how internet users interact with the major social networks.

Facebook: Based on Facebook’s press center, and also the Internet World Statistics Facebook now has 955 million users with 160 million US accounts. The social network has faced some serious challenges this year, such as the collapse of their stock price, and a decrease in time spent on the social network. They are still an impressive mammoth in the industry with close to 50% of users visiting on a daily basis; and with roughly 8 hours of usage per person they seem to be in good shape.

Youtube: According to their press center, Youtube has 800 million unique visitors every month. While those are not accounts, this is the closest I could find. Plus, these are the numbers Youtube provided, and I like to go with source material. The social network is taking on even more prominence now, because they are getting so much search traffic from their sister search engine Google.

Twitter: The social network surpassed 517 million accounts in July, and is growing at approximately 11 accounts per second. By my calculations that means they have approximately 525 million accounts currently.  With almost as much publicity as Facebook, you are starting to see more stars use Twitter to post quick updates to fans. For business owners, this is a great site to drive website traffic.

LinkedIn: This social network has an international reach, but has a much deeper American connection than Facebook and Twitter. According to LinkedIn’s press center, 62% of all current users are outside the United States. This is also the social network with the highest average income per user on this list, and executives from every Fortune 500 company use the site.

Google+: The search giant’s social network has grown up over the past year. Last year when we went through numbers they were at 20 million, and predictions pegged the social network at 100 million by the end of the year.  At Google I/O, their annual developer conference, they announced Google+ plus now has 250 million accounts. We estimate based on Google numbers that 30% of their users are in the US.  The majority of that growth has come as the company pushes every single application they own down the Google+ path. The integration has been interesting, and sometimes annoying. However, they are probably here to stay. 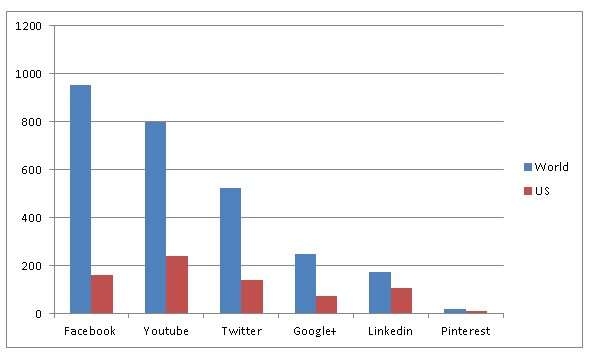 No longer with us statistically: I decided to remove Foursquare from the list, because they are statistically flat-lining.  Also, I know that Skype is a great social network, however, the numbers are too erratic for me to give you reliable accounts. Henceforth, I am dropping them from the list.

Quick homage to mobile: While this is not a mobile statistics demonstration, we will be coming out with our first mobile marketing statistics post in the next couple of weeks. So much of what we are seeing on these social networks is dominated by mobile marketing today that the two need to be mentioned together.

Finally, the biggest number that popped out to me was the number of accounts people had worldwide and also here in the United States. Worldwide there are 2.725 Billion accounts, or 1.2 accounts per active internet users around the world. Here in the US there are  733 million accounts, or the equivalent of 2.31 accounts per American. The results of this are staggering and definitive; if you are on the internet today you are on social networking sites. While social networking dominated the results over the past two years, this is the first year social networking has so overwhelmingly dominated the internet.

What do you think of the social networking statistics 2013?