Last year, I was looking to prove statistically why you need to use social networking for your business. Since the word “Facebook” is as common as the word “Kleenex” nowadays I thought this year would be an update on a continually growing trend.

Please note: I am exchanging Myspace for Google+ and Skype. This is not to say that MySpace is dead, even though it feels that way. The reason is that it is just not useful for most small business owners, who mostly visit this site. Plus, I should have included Skype in last year’s social networking statistics.

So, let’s start again with the basic numbers.

Using Internet World Stats as we did last year, we will notice how the numbers of Internet users rose slightly from just below 2 Billion last year to 2.1 Billion this year.That is out of 6.9 Billion people on the planet.

That means that 30% of the world is online, which is a 2% increase from last year. 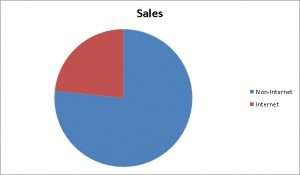 What Does This Mean For Social Networking Statistics 2012?

Very simply, we now can accurately understand how big a role social networking plays online. If you are not using the internet, then I will take a large lopsided bet that you do not use Facebook. To Tweet would be an even greater fallacy.

So, with this in mind let’s evaluate the big dogs of social networking. Keep in mind that I mostly doing this from an American/Western European viewpoint. I am not looking at networks in China and other parts of the world that are equally as large. Partially, because I do not really know anything about them. Partially, because because the bulk of the people reading this blog focus on the networks listed below.

Facebook only has 750 million users on their site. That is from the 500 million they had last year. I am going to put a big however here, because there are recent reports of Facebook users fleeing the site. My best guess, and this is only an educated guess. Their growth will slow, so maybe next year they might have around 800 Million at this point. I know I am putting myself out there saying this, but they do not have a lot of room to grow.

Can you think of a social network with 750 million user that until very recently was not talked about that much? O0h! Ooh! Ooh! I know! Skype! That is correct! Until Skype was recently bought by Microsoft for $8 Billion cash (Mazel Tov!), they were well known and discussed. But they did not always get the media exposure that Facebook and Twitter received. Add one for the international free video call with chat feature!

Twitter has had a huge year. A few months ago they surpassed 200 million and there is more growth left to this site. Do not be surprised to hear the 300 million word being spoken around the end of the year.

LinkedIn finally hit 100 million. I say finally, because they are older than Facebook and Twitter. The suit and tie network is also the first social network to go public. Look for them to continue to dominate the business social networking.

Google+ is just over 1 month old now. The proud baby sister of Google Search along with beam parents Larry Page and Sergei Brin. How much this social network will completely change social networking in the next year is not sure, but there is definitely some changes in the making. They have 20 million users already and should hit the 100 million point by the end of the year.

Update: My bad! I missed a post stating that Google+ has 170 million users right now.

Foursquare is still growing pretty quickly as well. However, it is not nearly as large as some of it’s social networking brethren. In June the company ticked off it’s 10 Millionth user. People are just starting to adapt to the idea of mobile, so this network has room to grow. 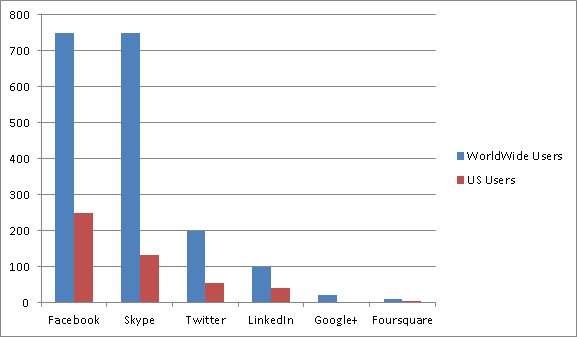 Notes:Alexa lists Skype  with 17.5%, Twitter 27% and Foursquare 32% of their traffic from the US, which is what I based roughly the number of US users would be. Google+ is too new for US statistics.

I ended last year’s statistics with the sobering reality that the world has changed. So, I guess it would only be fitting if I stated this year that the world has remained the same, except more social. We have taken social networking into our homes and offices and made it a part of our daily lives. The people we meet here become a part of who we are in our offline and online world. What are your thoughts about the social networking statistics 2012?