As my recent posts, indicated I visited Egypt recently. For me, it was a trip to explore treasures that I had read about since I was a kid. It was also a chance to learn about a new culture. Because of these excursions I got to see social networking in a different light.

Egypt is a place that is encompassed in a sea of change and still the same land that it was thousands of years ago. An enigma that I will do my best to explain.

My wife and I do not go look for the touristy things to do. We saw the pyramids, abu simbel, and other amazing sites. However, we go for the culture. Our greatest experience in Egypt was riding a bike through the countryside near Luxor. We stopped after riding our bike for an hour and rested on the side of a building. After about 2 minutes we were about to get up, when a man came out of the building. It was his home. He, without question of who we were, invited us into his home for tea. He showed us into his home and with pride gave us the tour. It was awesome!

The most amazing part about it was that he did not speak English and we really did not speak Arabic. We had a small phrasebook with us that became our bible in Egypt. Still, we had an engaging conversation with him. His two daughters and son were very friendly. 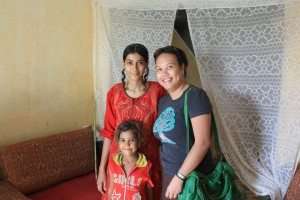 Micheli with Hind and Donia

The hibiscus tea was great! After about 30 minutes in their home we left. We have their email, so we can stay in contact, and a new friendship is born. This to me is the old form of social networking. One that has not died out, but lies quietly and happily available. Want to add a friend. Sit on the side of someone’s house and be invited in for tea. Simply amazing!

There were many amazing moments like this. We made a number of friends at the sheesha bars. With the clouds of hookah clouding the air, we met many new friends. In Cairo, there was our waiter who found out we were from Chicago and called us with a smile “Gangster” every time he came by our table. In Luxor, they showed us how to play to backgammon, and it became a small obsession on the trip. Want devoted followers, break the ice for some strangers in a new country.

Not everything was so rosy. Some of the vendors in the souk harassed us for the sale, but that is a post for the future. In the meantime, I want to imagine sitting with my new friends having some chai (tea), playing a game of backgammon, and enjoying the cool evening air. That is the old social networking. In my head, I imagine the pyramids being decided over a cup of chai with the pharaoh and his advisers talking around a long table.  They sat around to discuss how to best use their social network to make the dreams of eternal afterlife for Khufu or Djoser a reality. Not much has changed in social networking in 5,000 years.