I will now predict social networking’s future for January 1st, 2014. Children do not try this at home. The dangers involved in an act of cunning like this are immense. First, you almost have to know what you are doing. Second, you need a curtain into the future where you evaluate the future of social networking with the laser-like precision of an expert.

How Correct Was My Crystal Ball For 2013:

First, I predicted 2/3 of social media users would use mobile devices to access their accounts this year. According to the SocialSkinny.com, 10% of all internet traffic is now via mobile. Additionally, 91% of mobile usage is for social media.  HubSpot stated that 73% of smartphone users go on social media everyday. I count that as a win!

Second, according to Juniper Research 197 million smartphones are now Augmented Reality (AR) enabled.  While the adoption rate was not 25% like I predicted, we now have the tools to get there.

Not exactly a win!

Third, My prediction on Google plus was 250 million plus users. They had 500 million users at the end of the year. Close! Only predicted 50% of their growth rate.

Fourth, Social Search. Because of the rise of Google Plus, I predicted the two would elope. And so they did, as traditional search measures like pagerank and backlinks went out the door. In waltzed, A Panda, a penguin, and a plus one. That sounds like the beginning of a great joke! If they had not messed up search so much it might almost be funny.

Now, for the moment we have all been anxiously awaiting. Your Social Networking Crystal Ball for 2014.

First, I am going to cop out and restate my Augmented Reality prediction for 2014. With 197 million smartphone devices now AR enabled, we have enough momentum to use this on a broader scale. We now have enough devices to start making a dent in the AR landscape. This can mean really cool things, like people walking around the streets with their phones in front of them in some Wall-E  like trance of the Axiom passengers here on Earth. 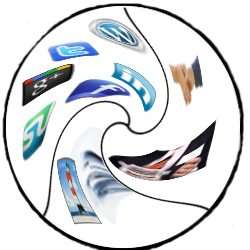 networking, which has been around for a few years, will become a bigger buzzword in the business community as smaller brands retreat from the large-encompassing social networks. I predict a 10% plus year over year drop in Facebook ad revenue to accompany this withdrawal.

Third, there will be a large scale blackout on the internet, because the government in their attempt to collect more money will do something really stupid. I know, I know, the United States government would never do anything stupid like removing websites without due process, or censoring activity on the web like a KGB operation. If SOPA, PIPA, and CISPA taught us anything this year, it is the government has no clue what they are doing.  My prediction follows the trends, and is a heads up for the freedom of speech vote ahead.


So, what have we learned from the information above? More businesses will be honing in on local social networking strategies to help their business. In fact, for social networking to have a dynamic future these local technologies will be essential.