Ready For The Your Twitter Toon of The Week?

This is the last Twitter Toon of 2010. Today I thought I would take you into the mind of a Twitter addict who has not been able to escape the world of Twitter wherever they have gone. In this case the Twitter Toon is about a man tweeting about his experiences in jail. I would imagine that while I am a huge Twitter fan, tweeting the entire day in prison would be pretty much take the fun out of using social networking. Just goes to show that everything must be done in proportion. 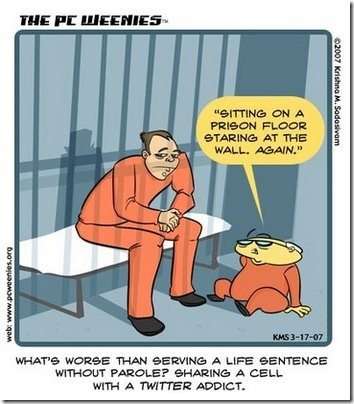 I hope you enjoyed your Twitter toons this year! We are always looking for new and improved cartoons for 2011, so feel free to send us your social networking cartoons to share online.