Publicity is FREE: 15 Commandments for Getting In on the Ride

An Excerpt from THE FRUGAL BOOK PROMOTER:

HOW TO DO WHAT YOUR PUBLISHER WON’T 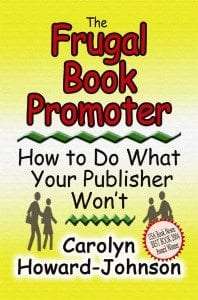 A huge retailer once said that advertising works, we just don’t know how, why, or where it works best.

What we do know is that advertising’s less mysterious cousin, publicity, works even better. It is the more reliable relative because it is judged on its merit alone and carries the cachet of an editor’s approval. It also is surrounded by the ever-magic word “free.” The two are easily identified as kin.

These two often walk hand-in-hand and yet they can be incompatible. The editors of good media outlets will not allow the advertising department to influence them. Still, in an effort to be completely impartial they reserve the right to use advertiser’s stories editorially if they deem them newsworthy.  That is why it is helpful to use advertising in a vehicle that plays to the audience you would like to see standing in line for your book. This paid-for exposure then becomes an entrée to the decision-makers. A contact in the advertising department may be willing to put a news release on the desk of one of his editors, maybe even encourage her to look at it.  There are no contracts, but it does sometimes work. If you’re going to try this route, choose a “little pond”, a bookish brochure or an “arty” weekly so that the dollars you spend will be noticed.

Sometimes a magazine or newspaper will run a special promotion called advertorial.  These are sections where you pay for an ad and then the newspaper assigns a reporter to cover the story you want told. The article carries some of the prestige of editorial copy—that is the general reader may assume the article has been chosen only on its merits because of its copycat character. The writer or editor you meet will can be approached when your have something exceptional.

Still, advertorial isn’t exactly FREE. If FREE sounds more like the fare that will serve your needs, carve out some time to do it yourself and follow these 15 commandments:

Educate yourself: Study other press releases. Read a book like my The Frugal Book Promoter: How To Do What You’re Publisher Won’t. Be sure to find the sample media releases and other writer’s tools in the Appendix.

Read, read, read: Your newspaper. Your e-zines. Even your junk mail, a wonderful newsletter put out by the Small Publishers of North America (www.spannet.org) and one called The Publicity Hound (www.publicityhound.com.)  My daughter found a flier from the local library in the Sunday paper stuffed between grocery coupons.  It mentioned a display done by a local merchant in the library window. My second book, HARKENING: A COLLECTION OF STORIES REMEMBERED, became a super model in their lobby and I became a seminar speaker for their author series. Rubbish (and that includes SPAM) can be the goose that laid the golden egg.

Keep an open mind for promotion ideas: Look at the different themes in your book.  There are angles there you can exploit when you’re talking to editors. My first book, THIS IS THE PLACE is sort of romantic (a romance website will like it) but it is also set in Salt Lake City, the site where the winter games were played in 2002 and, though that’s a reach, I found sports desks and feature editors open to it as Olympics © fervor grew and even as it waned because they were desperate for material as the zeal for the games wound down.

Cull contacts: Develop your Rolodex by adding quality recipients from media directories. The Web site http://www.gebbieinc.com/ has an All-in-One Directory that gives links to others such as Editor, Publisher Year Book, and Burrell’s. Some partial directories on the web are free and so are your yellow pages. Ask for help from your librarian—a good research librarian is like a shark; she’ll keep biting until she’s got exactly what she wants.

Etiquette counts: Send thank-you notes to contacts after they’ve featured you or your book. This happens so rarely they are sure to be impressed and to pay attention to the next idea you have, even if it’s just a listing in a calendar for your next book signing.

Partner with your publicist and publisher: Ask for help from their promotion department—even if it’s just for a sample press release.

Publicize who you are, what you do: Reviews aren’t the only way to go. E-books are important promotion tools and Twitter is big news right now (find me on Twitter at @frugalbookpromo). Katy Walls, author of “The Last Step,” coordinated an “anthology” of recipes from authors who mention food in their books (yes, some of my family’s ancient recipes from polygamist times are in it). It is a free e-book, a promotional CD, and great fodder for the local newspapers. If you’d like a copy, e-mail me at [email protected]. Use it as a cookbook and as a sample for your own e-book promotion.

Think of angles for human interest stories, not only about your book but about you as its author. Are you very young? Is writing a book a new endeavor for you? Several editors have liked the idea that I wrote my first book at an age when most are thinking of retiring, that I think of myself as an example of the fact that it is never too late to follow a dream.

Develop new activities to publicize: Don’t do just book signings. Use your imagination for a spectacular launch. Start an award. I give the Noble (Not Nobel!) for literary work each January at MyShelf.com. Get charities involved. Think in terms of ways to help your community.

Frequency is important: The editor who ignores your first release may pay more attention to your second or twenty-fifth. She will come to view you as a source and call you when she needs to quote an expert.  This can work for novels as well as nonfiction. I received a nice referral in my local newspaper because I am now an “expert” on prejudice, even though my book is a novel and not a how-to or self-help piece.

Follow Up: Shel Horowitz, author of Marketing Without Megabucks reports that follow-up calls boost the chances of a press release being published. Voice contact builds relationships better than any other means of communication.

Keep clippings: Professional publicists like Debra Gold of Gold & Company do this for their clients; you do it so you’ll know what’s working and what isn’t.

Evaluate: One year after your first release, add up the column inches. Measure the number of inches any paper gave you free including headlines and pictures. If the piece is three columns wide and each column of your story is six inches long, that is 18 column inches. How much does that newspaper charge per inch for their ads? Multiply the column inches by that rate to know what the piece is worth in advertising dollars. Now add 20% for the additional trust the reader puts in editorial material.

Set goals: You now have a total of what your year’s efforts have reaped.  New publicist-authors should set a goal to increase that amount by 100% in the next year.  If you already have a track record, aim for 20%.

Observe progress: Publicity is like planting bulbs. It proliferates even when you aren’t trying very hard. By watching for unintended results, you learn how to make them happen in the future.

Carolyn Howard-Johnson is the author of THE FRUGAL BOOK PROMOTER: HOW TO DO WHAT YOUR PUBLISHER WON’T (www.budurl.com/FrugalBkPromo ). For a little over 2 cents a day THE FRUGAL BOOK PROMOTER assures your book the best possible start in life. Full of nitty gritty how-tos for getting nearly free publicity, Carolyn Howard-Johnson shares her professional experience as well as practical tips gleaned from the successes of her own book campaigns. She is a former publicist for a New York PR firm and a marketing instructor for UCLA’s Writers’ Program. Learn more about the author at http://HowToDoItFrugally.com