Pardon My Gripe, But What The Heck Is LinkedIn Thinking!

I have done my best to just bite my lip on this, but I have some challenges with LinkedIn’s new business social network approach. It seems the change to a public company has left some undesirable traits at a network that has traditionally been pretty awesome at what they do.

They had their IPO, made some nice changes to the structure of the site, and snuck in a few features that make you swear to the high heavens.

I understand that LinkedIn has to make money, just like we all make a living. My challenge resides in the sneaky ways that  the business social network is applying ways to convince people to take part of their monthly subscription plans.

First of all, I want to give you a heads up! I have a paid subscription to LinkedIn. I started mine about 6 months ago, because I believe it is a useful tool to help my clients. For those who want to sit around and complain that I am griping about me putting my own two cents into the LinkedIn coffer, please note that I have put close to $200 into that coffer to date.

Therefore, I am not speaking about this issue for my own benefit. Instead, I am writing this for new or newer LinkedIn users. They are the ones who have to learn the system, before being gouged for money. Even a large network, such as LinkedIn will continually need new members to make the site dynamic.

So I say to LinkedIn, stop limiting who you can connect with, because of how much money you put in LinkedIn’s pocket last month. No one wants to be limited to connecting with people to just a few InMails. That is insulting. I do not know what bone head meeting it came up at that people would pay just for the privilege of emailing someone else on LinkedIn, but that has got to be the worst business model out there.

At least give people the option of connecting with that person first, instead of just sending a glorified email. Epic Fail LinkedIn! Epic Fail! 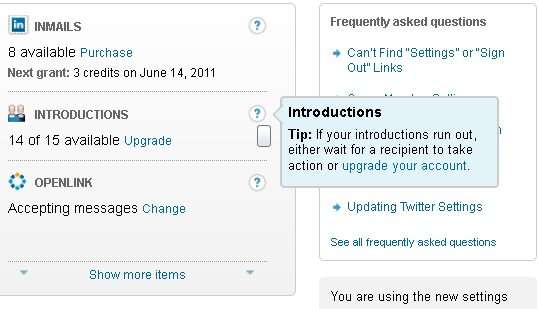 My favorite feature designed to squeeze the most money from you is the introductions(see picture above). With the pro account, you can have 15 introductions to prospects through your current network.

For example, I ask Sally to connect me to Billy. That counts as one out of fifteen. Nothing wrong there. They have to limit how many people you send out introductions to, so some people do not abuse the system by spamming everyone and their mother.

The challenge is with unsuccessful introductions. Let’s say Billy forgot his LinkedIn password. He never accepts the introduction, and it sits there forever on LinkedIn’s servers.

Instead of allowing the system to automatically reset the introductions after a certain period of time or permitting me to revoke the introduction after a reasonable period had gone by that introduction could be lost forever. Make that mistake 15 times and then LinkedIn’s suggestion is that you upgrade your account.

Now, 15 introductions sounds like a lot, but remember that some people have now been on LinkedIn since 2003. That is only 2 introductions a years lost before you are out of luck. Is it that important to get people to pay that you are depriving people of the very nature of how a business social network would work?

Did you do an IPO a few years before you were really profitable? What the heck? I already pay you $25/month, only to be told that, oops, sorry you have not put in enough at the LinkedIn tollbooth to be a useful member of our club.

Another feature that they added that annoys me to no end is that they stopped allowing you to connect with group members without having their email address. Even 3rd level connections now require an email address to connect.

Just to emphasize this point! We are supposed to go onto LinkedIn, become active on the groups, connect with people we know in order to build our network, and then stop short, because that person is three degrees away from us? What is the point of joining a group of your peers if you can not connect with people on a one to one basis at some point.

Raise your hand if you would like to waste all your time on worthless tasks please?

So, what is a good gripe without a solution! My two cents lead me to the obvious answer that LinkedIn should allow paid members to connect with groups and 3rd level connections. 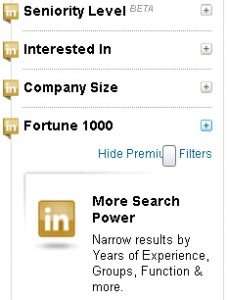 That in combination with the added LinkedIn search capabilities was enough for me to look into the pro account.The advanced LinkedIn search options have got to be one of the most useful features that I have found through all of the social networks. It blows away Twitter and Facebook search to smithereens.

Focus on how great your search is, and the added ability to connect with larger levels of networks. If you explain the benefits, and stop pulling away features you will have a more dynamic network.

Additionally, stop this BS about the number of InMails you can do per month and Introductions. The fact is that elevating an email is not worthy of the social network you have created. Instead, focus on pitching the pro accounts based on items, such as expanded searches and connections.

Otherwise, LinkedIn risks becoming the next MySpace. A slumbering giant ready to be overtaken by newer and better business social networks.