I want to start out by saying that I am not opposed to Facebook ads. They are a legitimate way for Facebook to sustain a network, and run a profitable business. That being said, Facebook has gone hog wild with their Facebook ads recently. 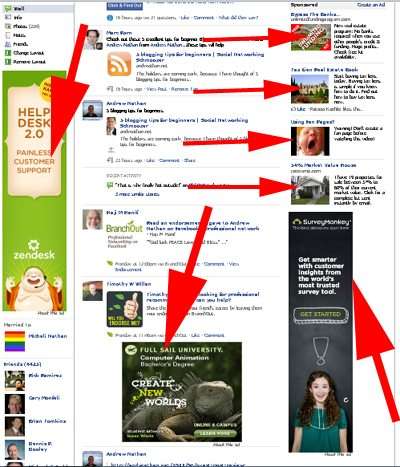 I apologize if this is not 100% recognizable. The graphic above is my Facebook wall. I had to actually zoom out the browser in order to fit all of the ads in one screen shot.Even with that, I still missed two more ads at the bottom of the page.

This is not really a smart move for Facebook. All they are doing is crowding up their entire site with less than average results. For what? A sub par user experience. They are not helping people by placing ads in between wall comments.

Wherever you look on the site you see ads now. That is the first sign that a company has lost site of what their website was there for. If the initial vision of Facebook was a social application, is the current vision one the largest classified ads section in the world?

Every site needs to monetize them self. This is critical for a site to actually maintain itself. That being said, you have to keep a balance to your site. Facebook is taking a huge step out of whack by underrating it’s users abilities to move elsewhere.

All Facebook needs to do is tone down their Facebook ads a little more. Give people the chance to click them on their own. Instead, with the current method you are more likely to have accidental clicks from Facebook users and unhappy clients, because of the lower click through rates.

That leads me to a final thought on this matter. Is Facebook at the point of saturation with their current sales strategy? Think about it. People are talking about how Facebook subscriptions are decreasing every month.

Out of the 2 billion people online right now, 700 million of them are already on Facebook. Is the only way for them to increase their revenue to douse us with Facebook ads until the flames of Facebook flicker like a match at the end of it’s stick?