How To Use Reputation Management In Crisis (Case Study)

This actually reminds me of a conversation I had with my mom a few days ago. Just landed a big account, and I told her that I need to change how people communicate with me to accomplish more in my day. She asked if the limited communication would hurt my business. What happens if there is a “Social Media Crisis” was her big question? I told her there are no social media crisis’s that can not wait 1-2 hours.

The response from BodyForm proves you do not need to rush a response to use response management correctly. You need a really good response instead. We have all seen how companies responded poorly to social media. This is a study on how a company used the medium correctly.

This all started with a Facebook update by Richard Neill. (see below) 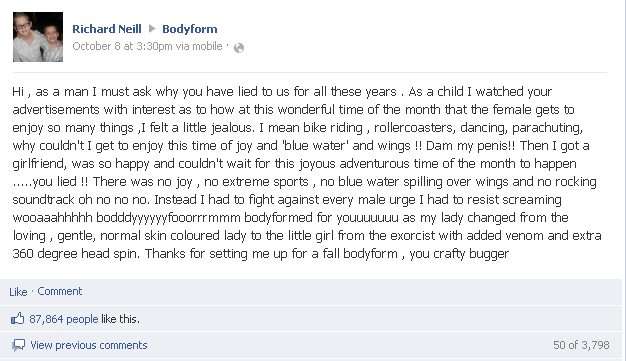 Richard Neill posted a status update on Facebook with 87,707 likes plus 3,798 comments. Essentially, it was a commentary on how woman personal care products are fictional. Most companies would be outraged by a post like Neill’s. However, BodyForm responded via social media in a way no one, particularly Richard Neill saw coming.

I think with any marketing and business reputation scenario you need to take a look at both sides of the coin. BodyForm’s response is hilarious. I think they drove home an idea that most women would

1. This is one of the best responses I have ever seen from a company. They even created their own CEO to deal with this scenario. Awesome!

2. This response was pretty darn quick,. Referencing my comment before about no social media crisis that needs to be resolved in one hour. Bodyform responded within 8 days with their own video after hiring a CEO/actor to respond.

While 8 days is a long time in the social media world let’s think about it this way. There were 44 comments on this post on the 8th. The major activity happened on the 9th when there were 3,0001 comments. The remaining 765 comments as of this tally were written from the 10th onward.  The company had an entire video shot in 6 days from start to production. Most Fortune 500 company’s would have sent their press release out in this time.

1. While I am a huge fan of sarcasm, I think the fart at the end was a bit over the top. Stick with the men crying and bloody uterine walls. More to the point.

2. Some of the responses have not unjustly mentioned that this is just turning into an advertising ploy. As a marketer, I am not sure if I really think that is a con. The con is making it obvious enough for buyers to know that they are being marketed to in a response video.

Richard’s post on our Facebook wall made us and over 80,000 other people click “like” because it was funny and highlighted some classic stereotypes. By creating this video, we hoped to go some way in encouraging the public and media to move away from all of these outdated period clichés and stereotypes. Humour is a great way to talk about sensitive topics, and we were delighted to be given the opportunity to show that as a brand we have a sense of humour. We had a giggle making this video and we are delighted that our fans have not only seen the funny side but have also been openly talking about periods – a fact of life that women experience every month. SCA, the manufacturers of Bodyform, produce essential products for everyday life – and we are proud to be behind a brand that women tell us they can trust and have confidence in.

The video has had over 1m views on YouTube in just two days. It’s been refreshing to see so many men commenting on this too, and engaging in a debate about a previously taboo subject. We responded to Richard’s hilarious joke with one of our own and we were delighted when he got back in touch telling us he loved it. Life’s much more fun when you don’t take yourself too seriously!

2. He has a point. Every tampon commercial I see on TV shows a woman doing things, and not even noticing her period. That just does not jive with reality.

1. I say this as a man. We have no clue what it is really like to have a period. This means we have no real business talking about the subjects in the first place.

2. Some people were not sure if he was joking. I think Bodyform was among them. 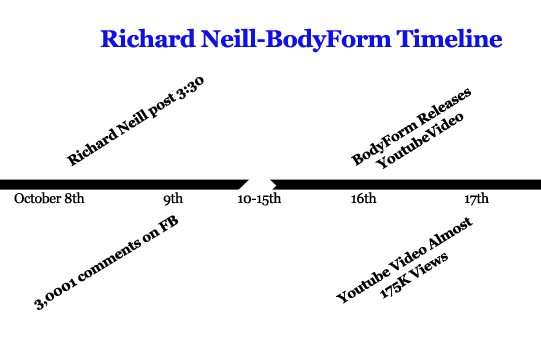 Here is what I do know as a marketer about this event.

I find it funny how a post sent out in jest set off the entire social media community, and sparked one of the best social media responses online. That is a case study of reputation management at it’s best.