OK! This is the story that I hate writing about. It is the one generally left to the anemic papperazzi who have nothing better to do in their lives then find the slips and spills of the rich and famous. After all, as an entrepreneur I want to learn how people become successful. Not tear them down when they get there! Google used to be one of those companies I admired. They had a simple idea that was completely… admirable. Make the world an easier place to understand by classifying the content of the world in one place. A digital Library of Alexandria. For a while they made amazing strides in technology and corporate welfare.

However, the time has come when we have to say what is good about a company that goes out of it’s way to burn and pillage small business owners at their fancy.

Before I get to far, I want you to know that I am not a MacBook, Starbucks sipping yippie! I state this even though I have the following:

2. Google Analytics Running All My Sites

3. Gmail and a G+ Account To Maintain Communications With The World

I use their services on a regular basis, so I try and refrain from the comment Google is Evil. For most of Google’s existence I considered them a rare breed of company that defies the usual corporate bullshit!

Who else would put complex mathematical equations with their phone number on it to build their IT team? What other company actually put in their Company Prospectus for their IPO, “Don’t Be Evil”.

However, they have crossed over. Into a land where Mr Burns would warmly invite Google into their Illuminati circle, while Doctor Doom and the Green Goblin could round off their trio!

Where do I find the gall to make these accusations? Below I lay out for you three reasons why I think the company has turned to the dark side.

1. Google seems to lately to be going out of it’s way to harm small business owners and bloggers. I will admit that I lost a large part of my traffic lately from Google. The funny thing is that I am still pretty close to the same number of opt-ins and likes as I was before the drop. So, if Google had never cut my traffic I would never have known how crappy their traffic was in the first place.  For that I say thanks!

However, when looked at as an aggregate I see a lot of danger in their recent moves. This is a post from SearchEngineWatch.Com

As they point out in Search Engine Watch,

See that bit there? It seems to imply that you’re guilty until proven innocent. That indeed links that are out of your control may actually hurt you and that you need to actually go and tell Google that they aren’t yours.

Essentially, Google is now penalizing you for sites that link to you. The entire basis of their original PageRank system was on backlinks from other sites. Now we have gone from that being at the center of search relevance to the detriment of a site’s search existence!

Talk about messed up!

Who let the strait jacket into that party?

2. Google is sabotaging Facebook. While some of this is conjecture, I saw the recent post from Dino Dogan about how 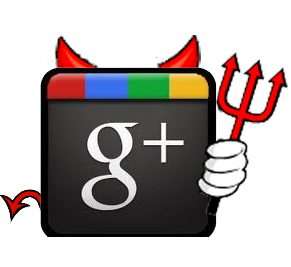 Facebook and other Google competing applications are having problems on Google Chrome.

While, I can not confirm this at the moment, I recommend you read Dino’s post to learn more about how Google might be sabotaging their competitors.

3. The Frackin’ Critters. I think Google enjoys it’s role as disruptor too much! Why else would they create a system that is secret to everyone outside of their own inner circle.

Their updates generally have the internet marketing crowd in a tizzy for days, if not weeks and months on end. It is their way of displaying their power! Just like a dictator having the troops march in the city.

No matter if only a  small percentage of sites have been effected in each launch, cumulatively I estimate close to 26% of websites have now been dramatically effected by the Google Penguin and Panda changes since February, 2011.

This information is based on the changelog at Trademark Productions.

If you want to correct me on these numbers, please do. I would love for you to prove that I added in too many sites for their revisions. However, from what I see Google is slowly eliminating a large swath of small business sites. What other answer could there be to Google’s recent purging!

Every SEO company worth it’s salt now knows that it has to create quality content to survive. The internet has long lived on the idea of “Content as King.” The recent explosion of WordPress blogs only goes to further this point.

How then at the height of so many sites with great content are so many of them being picked off by and large by Google? If you do it a little at a time then no one notices right? Well, the time has come when they stepped a bit too far. Something is not right with these changes. Every instinct in my body tells me that there is something we are missing here.

This leads me to the initial question of this blog post, How Google Became Evil?

I would have to say from the evidence above that fear, as always, played a role in this massive shift. Google over the past year has had a fanatical, almost fervent desire to push Google+ in everyone’s face. By all accounts, their efforts have reached some traction as their 250 million members now demonstrates.

However, Google has lost a lot in the past year as well! This push has shown a lot of people that Google has lost it’s way in a modern world full of social interactions.  Maybe as they were cowering in 2010 at the idea of Facebook being the largest site in the world they looked around, and saw a future without their vision of the future.

When you have lived with an idea of who you are for so long, looking in the mirror to see the warts becomes painful. In my opinion, Google turned off the lights when they looked in the mirror. They then bravely beat their chests telling themselves we are Google, and can do anything we want.

Over the past few years they have embarked on a crusade to get back to relevant. However, their crusades became bloody like most crusades do.  And that is how Google became evil. In the streets of Jerusalem, with the “blood up to their ankles” we see now how far their fervent belief  will go to succeed.

The bigger question is what can we do to stop this travesty? That is something internet marketers and bloggers must come together to discover. For no longer, can we sit and watch. One of my favorite lines from history is Edmund Burkes. “All that is necessary for evil to triumph is for good men to do nothing.”

I therefore propose those who are interested in making a difference share this information with their friends. Let everyone know what Google is doing. When everyone is aware of this, Google will be forced to turn on the light. One blog can not face down an empire of evil. However,  together we can make a difference.