We have to discuss the coolest social networking blog on the planet today. OK! might be a little biased here. I was going to do a post on this last week ahead of the date, but with SOPA and all the great guest blog posts over the past two weeks I have not had a chance to give myself a proper happy 2nd blog birthday! So, let us do a belated happy 2nd birthday to this blog. That is correct! AndyNathan.Net just had it’s second birthday. We are in terrible twos, so watch out! 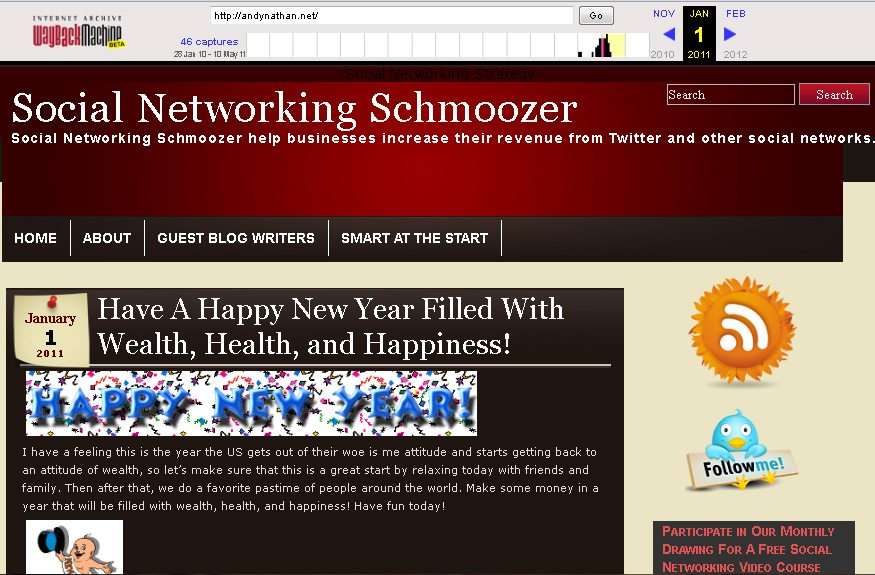 This is what the site looked like on January 1st, 2011

Actually, it feels like after two years I am just starting to understand this “blogging” thing. My philosophy is that any new blogger who has no clue what they are doing the first six months is exactly where they need to be to learn. I had a few interesting learning moments when I first started. For a list of my all time social networking blog duh moments check out the Social Networking Blog Duh List.

In our first year of blogging we did a recap of where we were at that point. This year it might be good if we do a little comparison between last year and today. Please note that the stats start January 21st on both years and end January 20th. While the site was up before then, the 21st was the first real post, even though the welcome post was up the day before.

To me these states are simply amazing. While I do not consider my blog big time. I think about the fact that I grew up in Arlington Heights, which according to the village has a population of 75,000 people. More people went to my blog last year than lived in the place where I grew up. Now, for business this means nothing, except for the complete coolness factor!

The bigger question might be what is the difference between 2010 and 2011 for my blogging.

1. Confidence! When I started this blog on a dreary, winter day in 2010 I was not sure if I had the discipline to continue blogging. In fact, in the back of my head I was not sure if this blog would even last two weeks.  By the time I had reached my outlandish goal of blogging every week day for one year I knew that this was no longer a test in discipline, but a part of my regular routine.

2. I found communities to belong to that helped me enhance my blogging. In networking, I have always seen the power of connecting with a group of people that I could relate to and form a mutually beneficial relationship. Note: while the wording here is complete dorkiness, it is probably the most profound of this entire section. My first year of blogging, I felt a bit like a lone ranger with no idea of how to do things better or who to talk with to improve my blogging.

My second year of blogging was more about re-learning everything that I did wrong the first year. That was because I met people who blog better than I did, and probably still do. There is still a lot of room for improvement, but I know for sure that I am a lot better blogger than when I started the year. Once I understood all the little nooks and crannies of blogging I could explore all of it’s intricacies.

In retrospect, there were a lot of things that I should have done earlier. However, there are a number of things that I am very appreciative for starting on when I did.  I am sure that by the end of 2012 (ignoring Mayan prophecy here) that my blogging will have a completely different perspective than what I am writing at this very moment. However, that is the point of blogging to grow and share that knowledge with others.