I thought we could have a full out WordPress Comment System death match between Disqus vs Intense Debate, and ReCaptcha vs me screaming, “Die, Die, Die!” This entire post is the result of my replies to comments not posting on my blog. In response, you must all suffer and learn about how each WordPress Comment System works and does not work below.Be prepared, this could get ugly!

Now, for those devotees who were with me since the beginning. I thank that one reader out there wherever you are in the universe (not a typo), you probably recall that we had a brief discussion last year about how to use a WordPress comment system. This will be a more in-depth look at the systems behind WordPress. It’s like undressing The Wizard of Oz with your eyes. Yuck!

Anyways, As we head into an all-out death match over the best WordPress comment system we have to take a look at the contenders and the battles they are about to undertake! Let us take a moment to understand to how we have reached such a major milestone in history. I almost feel like saying, “Stardate 4.72.52.73.”

It all starts about a week or two ago, when I was replying to comments. I noticed that none of my comments were actually being recorded, so I switched to Disqus for a while to see if that would resolve my challenges, and then tested out Intense Debate. When that did not work, I then went back to the drawing board. But enough with this tale of woe and boredom. On with the matches for a much more detailed, action pack view of each WordPress comment system. 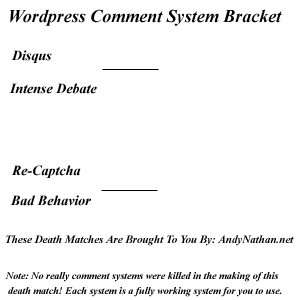 Now, for our first match Disqus versus Intense Debate.

This WordPress comment system has been used by practically everyone from Mashable, Techcrunch, and Engadget to WordPress and Blogger blogs. It is a pretty easy system to use. The one downside is that you have less control over including other plugins with the site, such as CommentLuv. The other challenge, and I would like to thank Kim Castleberry who pointed this out on the TSA forums, Disqus can cost you valuable comments(see post from Wassup Blog).

And in the other corner, we have a fierce, new competitor entering the ring. With an Alexa rank of 3,827 and a pagerank of 7, Intense Debate!

Intense Debate works very similar to Disqus. The big benefit is the ability to include plugins, such as CommentLuv. My big challenge is that I have had challenges adding this WordPress comment system to my blog. I followed the instructions, as someone who has a unique perspective for a social media person (I am not a techie), found it impossible to incorporate into my site. Now, that does not mean it will not work with every site. Just right now, I was having trouble with it working for mine.

So, the winner of this round of the WordPress Comment System Death Match is: Disqus. For obvious reasons, like reliability I went with Disqus.

ReCaptcha vs. Bad Behavior (Please use Applause button above)

In this corner with an Alexa ranking of 1, part of the Google throng of divisions, and guaranteed no matter what you say a guaranteed spot on the top 10 results for various categories, Recaptcha.This is also where my challenges started with this entire debate. Something was not working with ReCaptcha, and my responses. However, when I uninstalled, deleted, and reinstalled this it worked fine recently.

And in the other corner, weighing a scrawny 93,450 on Alexa, Bad Behavior! When Disqus did not work with other plugins, I installed this plugin. It works great. The only challenge that I found was that it not only blocked the good bots, but also blocked Bing, Yahoo, and Google bots from scanning my site for search engine goodies to show to the world. I am not sure what happened when I noticed this first, my heart or my mouth dropping farther to the ground.

So, the winner of the Recaptcha vs Bad Behavior fight is ReCaptcha.  Despite the obvious flaws of not recording my responses temporarily, all was fixed and Bad Behavior was bad for search traffic. 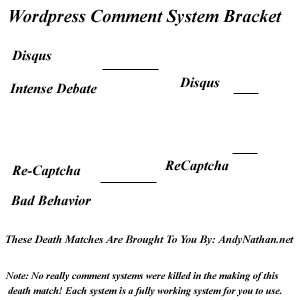 Now, for two competitors who need no introduction, because we did it above, I give you Disqus vs ReCaptcha. Let’s recap here for a moment.

1. Disqus works fine as a system all by itself, but does not play well with others. You are not able to use this plug-in on WordPress with other comment systems, such as CommentLuv. As anyone who is in TSA knows, that is a big no-no to not include this. The other huge challenge is that people are reticient to use Disqus, so it could cost you valuable comments. For a huge organization, such as Mashable or Techcrunch it is not huge, but for a starting blogger this might be a big loss to your credibility.

2. ReCapatcha sort of got angry at me a few weeks ago . It just stopped putting my responses into the system. That being said, it has worked fairly consistently for the past year.

So let’s see who the last WordPress Comment System standing is. Oh boy, the suspense is killing me! 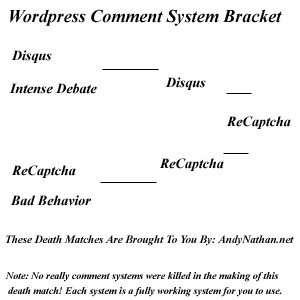 So, it was a tough all out battle, and many appendages were lost in the battle to become the WordPress comment system all-out champ. ReCaptcha won it, because aside from a few hiccups here and there they have shown the most consistency among the major WordPress Comment Systems. So, with the being said, leave me a comment about what you think is the best WordPress Comment System.