Today we are going to talk about the Chicago business neighborhoods, villages, and towns that make up not only Chicago proper, but the entire Chicagoland area. It is amazing how much different each area of Chicago is to itself and how much those differences translate into different marketing strategies. So, for our final foray into the Chicago Business Week we are going to take a look at these little havens. 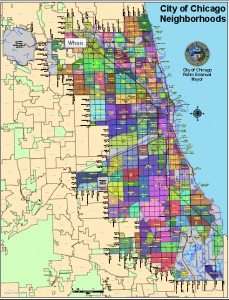 First, let’s break down the hallowed Chicago neighborhood. Chicago neighborhoods have been around for decades. In the 1970’s Chicago’s Department of Planning and Development went door knocking in order to determine what neighborhood everyone in the city was living in. While not exact they broke down these answers and the modern neighborhoods that you see today were created(See map to the left).

Within most neighborhood’s you will find that they each have their own neighborhood chamber, and more importantly a very distinctive feel. It is hard to describe if you have never been to the Windy City, but if you go into the South Shore neighborhood you will find a completely different look and feel to the neighborhood then in Lincoln Park.

Or even a different feel between Lincoln Park or nearby Bucktown. The difference between these two neighborhoods is just a mile, but they feel a lot further away in the feel to them. You have some of the yuppies in Lincoln Park, while Bucktown takes on a more artistic, community feel to it.

What this also means is that you have to do business in these two very distinct neighborhood your entire look and approach needs to be different. In Lincoln Park you might consider dressing up a little bit to network versus Bucktown where depending upon the crowd you are looking to reach slacks and a dress shirt might be overdressed.

However, these differences in Chicago business are just beginning when you also factor in the nearby villages and towns that make up Chicago’s suburbs.

Chicago Business In The Suburbs

Quick what is the difference between Oak Park and Oak Forrest?

If you answer is one has wild vegetation and the other is maintained than unfortunately you would not be correct in this instance. One is at the heart of the near western suburbs of Chicago and the other is in the South Suburbs. Actually, Oak Park has almost as storied a past as Chicago. It is the birthplace of Ernest Hemmingway and has the largest collection of Frank Lloyd Wright homes in the world.

Now, as to the different Chicago suburbs keep in mind that they are generally broken down by area. So, you have the South, Southwest, West, Near West, Northwest, and North Suburbs. A Northwest suburb, like Arlington Heights where I went to high school is not surprisingly northwest of the city.

What you will find is that the suburbs are generally more alike to each other in how they operate. It is more universal how to approach the different suburban networking groups whether in the West suburbs of Naperville and Wheaton or the south suburbs of Orland Park and River Forrest.Plus, all of the different villages and cities have their little main street core where the town was founded. All the little shops will be around there. Then you have the chains spread throughout the town.

Either way, suburban or city, you need to know who you are connecting with others for business, because it does make a difference to the many different neighborhoods, villages, and towns that make up Chicago business.

On a final note, I hope you enjoyed this tour of Chicago Business. I know it is a little bit different than our normally scheduled program, but I thought a week in the life of the city where I was born, grew up, and live right now would be a fun adventure. So, next week no more Chicago business, because we are strictly back to the fun world of social networking, internet marketing, and SEO.