Borders Is Closing And The Sky Is Falling

I want to veer off a little from social networking today. Fear not, we shall return to our normal programming tomorrow.

This weekend my wife and I went out for a movie and dinner date. As the mature adults that we are , we decided to see Hop. Then we had dinner, and were about to go home, before seeing a Borders offering 90% discounts on their books. Our mouths drooling at the site of those signs, we immediately found a parking spot and went in. As we entered the Borders, we saw the signs below. 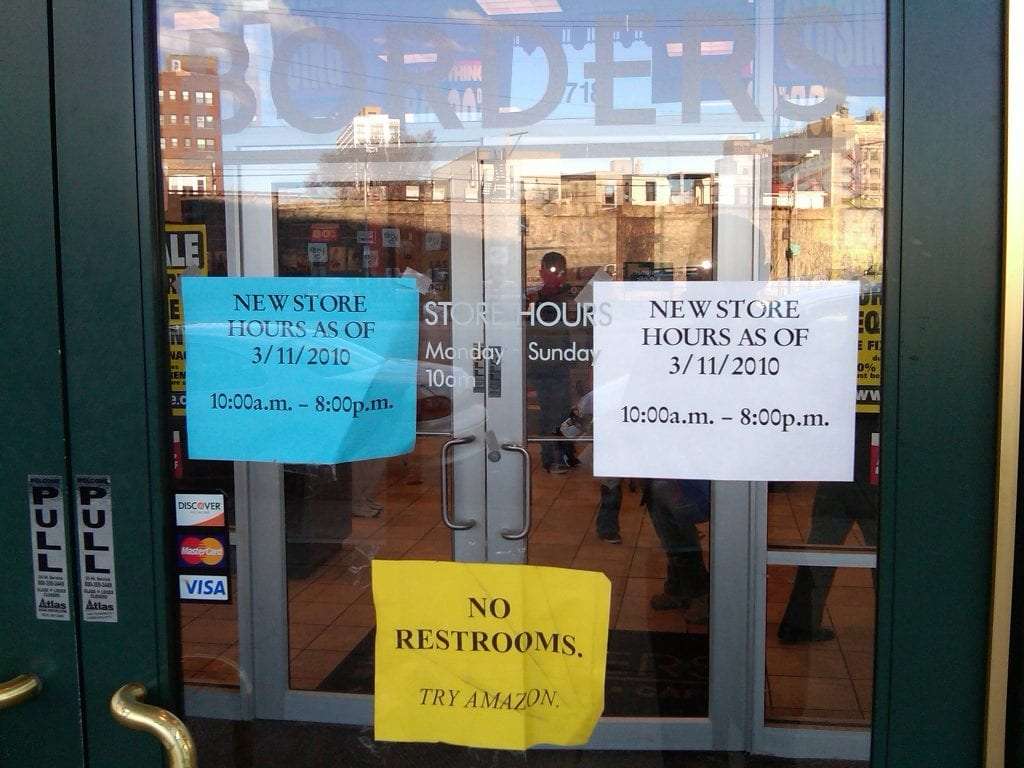 I understand that a number of the employees at Borders must be pretty apprehensive to still be working at a place that they will be fired from in the next few weeks. There are a number of feelings probably going through their head right now, including fear, resentment, hatred, and understanding.

At the same time, I believe whenever you put up a sign at the front of the store that says, “No Restrooms. Try Amazon” you clearly do not understand why your company is out of business.

It sort of reminded me of Chicken Little, a story my parents apparently read to me every night for a year and a half until they could not stand reading it to me night after night anymore. I barely remember the story, but they still can recall the entire story by heart when you mention it to them.

There are a number of different versions to the story, but from what I remember about the one that my parents read to me it was how you should not believe everything that you see. These employees saw a big company, like Borders providing long lasting income and security. At the same time, when the acorn/pink slip hit them on the head they became frightened.

So, where am I going with this tale of Amazon restrooms, Chicken Little, and income & security?

The world has changed without us even knowing, and I see even more changes like this in the future. The internet has blindfolded long standing businesses into obscurity. Additionally, with the new recession the idea of masses of people going to work at a factory or office-like factory will be destroyed

Instead, here are some changes that I see happening in the near future that will finish the changes we have seen over the past few years.

First, I believe that the real estate fall will also lead to another larger fall in commercial properties. According to recent research there are somewhere around 35 million home household offices in the US. A large percentage of those are home based businesses.

If you figure that the average family has their 2.4 kids and that maybe half of the home household offices have the old family value of 2.4 kids then we are talking about roughly 78 million people in the United States who either have a large percentage of their income or all of their income derived from their home household offices. There are 311 million people in the US, so roughly 25% of this country works from home.

How can the commercial market fully recover with such a large part of the US economy not following the traditional 9-5 work schedule?

Second, when all of these businesses collapse what will happen to the tax base? Illinois is a perfect example of this. The state has been scrambling to balance the budget as they cut services and raise taxes (see Open Letter To The Death Of Illinois Corrupt Officials).

What happens when all of the businesses that pay real estate tax, employee taxes, and pensions close? You are left with a huge mess, which is evident across the entire country. Right now, I have not seen one politician who consistently understands the challenges that are occurring outside of a traditional Democrat/Republican viewpoint. Raise taxes, lower taxes means nothing when steady businesses close, and entrepreneurs who do not like the tax rates move out.

For me, I found something in Borders bigger than books. I found a world changed, and a system that does not work anymore. I want to come up with ideas that would work, but I also am interested in your opinions of how we can help. Or perhaps I just see the sky falling?